Shantel - The Joy of a Child and a Card 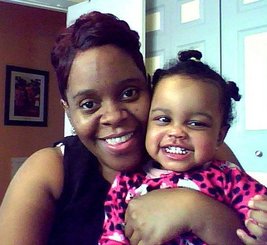 Everything that brings you joy in life begins with a purpose. It was a long journey before I found my purpose and truly realized my joy. I started designing greeting cards when I was about 18 years old. I attempted to design them as a business three times prior to launching my card business, Lil Ms Sophia. As much as I loved designing cards  I could never keep up the passionate momentum to continue doing it as a business. I guess you could say my mind always seemd to wander and lose focus.
Even though I had gotten married and had a pretty good job, I still felt like I didn't have a purpose. No matter what I did it always felt like something was missing in my life. After my marriage ended I became very closed off to the world. I had long since wanted to become a mother, but after a failed marriage it seemed that I would never have the opportunity. It's funny to think about it now, knowing that just about every doctor told me that I probably would not be able to have kids.
Needless to say, I finally got my wish. In July, 2009, I became a mom to Sophia Avery Dynette, and from the moment she was born on July 23, 2009 my purpose became clear and my passion reignited for making cards. All the inspiration I ever needed existed in the little girl I had longed to have. I re-launched my card business in March, 2011 and named it "Lil Ms Sophia" in honor of my daughter. It has been nothing but complete joy ever since. My level of creativity increased tenfold! Now I love making cards more than I have ever loved making them before. You see, now I have a purpose in my life. Everything I do is for this little girl of mine. She's the reason why I breathe and there is simply no greater joy in my life than her. She makes everything I do feel meaningful.

I honestly cannot remember how I met Shantel, but I do know it was through the oh-so-powerful connection of Facebook. At some point I "liked" her business page and discovered her beautiful handmade card creations. Being a lover of cards myself, her work was very appealing to me. I'd like to invite you to discover her work for yourself, and perhaps purchase something beautiful for yourself or a friend. Her Facebook page can be found by clicking here, and her website is located by clicking this link. If you are inspired by Shantel's story, please make sure and let her know you
read about her on "Find Your Joy" .Thank you for taking time to read about Shantel and her daughter. ---Kim

This is very long, so please bear with me. Finding My Joy Through Grief On January 23rd 2009, at 4:45PM, I lost my Doggie Daughter Gracie. She was my first CockerSpaniel and she was with me through every trial and tribulation from Friday April 11th 2003 until that agonizing, bitter afternoon when she died of a heart problem. I stumbled around for three weeks trying to make sense of it. I new she was an old dog, but still! In my mind she never got older then 5. That's how old she was the day my parents brought her home from the shelter. I couldn't bear not finding her on the couch or not tripping over her at night when I got up to go to the restroom. She would lay in front of my bedroom door at night as if she were guarding me. It was so bad that night as I bathed and brushed her for the last time, all I could think about was crawling into the ground with her. My best friend Holly actually stood there holding onto me after I'd placed her in the ground as if she new my thoughts. I would go outside at night and lay atop her grave in the snow and weep for her bitterly.
I told my friend I had to get another dog, another CockerSpaniel. That was the only solution. On Sunday Febuary 15th, my Father and I pulled up to a rescue mission an hour and a half away from home. We went in to see the CockerSpaniel the woman had said we could look at. She was the only Cocker the woman had and was terrified of everything. "She's from a puppy mill." the woman said off-handedly as if it was no big deal. Once the woman found out I was blind that only complicated matters. "She runs from everyone. You won't be able to catch her. It won't work." She and my Dad carried on a conversation while I sat with this nameless beautiful baby girl. I had to sit in the corner with her because she wouldn't come to me. She lay very still on her stomach, head on paws, nothing even letting me know she was alive but her panting. I sat with her for 2 hours and still not one movement. The woman was still not sure but I said: "Call our vet, check our references! I want to take care of her! I know what it's like to have society not believe in you, I can take care of this dog!" She finally agreed on a "trial" basis. I had to agree to call her and let her know how the dog was doing.
I settled on Sadie as her former name was Socks and Sadie was closely related to Gradie, which my Dad called Gracie often. On the drive home she licked my hand. I knew we were set! We had to be! At home though, she wouldn't eat for 3 days. She seemed to hate my sister's dog Duke, even though he was just a big furball trying to get acquainted with her. She never showed signs of aggression, just acted like a puppet on a string. Everywhere I went, she went in my arms. Where ever I sat her, she stayed until I was ready to take her somewhere else. She was afraid of the children, shaky about being on a leash, confused on the grass outside and the carpet inside. She wouldn't even look at you if you called her name. She hid in my room whenever I'd let her get away with it and would try to escape the few times we let her off the leash. She ate wet puppy food for the first month.
Fast forward to today, Independence Day 2010. She still doesn't really know how to play with other dogs and isn't sure of the kids. She runs away if she comes into the living room and discovers that you've seen her make her grand entrance! She still isn't even sure about toys and doesn't play fetch, but when I ask her who the baby is she crawls to me on her belly. When she sleeps her head lays on her front paws and her back paws stretch out behind her, feet pointing out sideways! She loves to be outside and runs around crazily in the grass. She's a chocolate-colored CockerSpaniel, which is very rare, so Dad says in the winter when the snow is piled high she looks like a little white calf running through it. And just this evening I heard her chewing on something so I rushed over to investigate! She had dragged Duke's chew toy into my room and claimed it as her own! I couldn't have been more ecstatic!
Out of my anguish over losing Gracie came something absolutely beautiful. I believe Gracie sent Sadie to me not just for her sake, but for mine. Through Sadie, I'm slowly learning to push my own boundaries and expand my own horizons. Not only am I blind, but I was also born with an extremely rare birth defect called a Tessier Cleft. Since I was 9 years old I've been hiding myself, isolating myself from the world in my bedroom. After I graduated public schools in December 2003 (graduated 6 months ahead of my class), after my mom left my Dad in March of 2004, I had only put up more walls, more defenses. I believe Gracie sent Sadie to me knowing that through helping Sadie find her joy, her Perfect Doggieness, I would also start trying to find my joy, my Perfect Humannity. And she was right. Thank you Gracie!

Michelle and I met through the people-connecting website of Owning Pink. She graciously sent me her story on how she found her joy and I hope her story connects with some of you who may be experiencing pain and heartache of your own. Hope and happiness is always there waiting for you when you are ready for it again.  If you'd like to leave a comment, for Michelle, please use the form below. Thank you. --Kim